The recently concluded Assembly Elections in Bihar are a good reflection of how Indian democracy is progressing. We seem to be taking some baby steps to move forward but are then dragged back due to various reasons. My assessment of what is at stake in these Elections is documented a month before the elections took place Why BJP would and should lose Bihar. 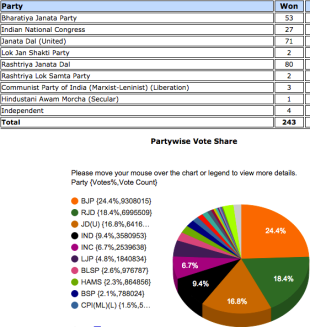 story altogether. BJP was the party with highest vote share but ended up being the 3rd largest party. RJD took the pole position with 80 seats and JD(U) is second with 71 seats. Just like when a number of BJP candidates rode the Modi wave in 2014 General Elections, Congress Party made its own mark piggybacking on Lalu-Nitish combination.

So, what can we infer from these elections?

1 step forward – BJP now realizes it has to perform

BJP government at the Centre has had a smooth 18 month run. They made some good progress in Defense and External Affairs segments. Investment climate has improved as well. But they have thus far failed to implement any programs that can be projected as making positive impact to farmers and middle class population. This was a major drawback in their run up to Bihar elections. They also failed to realize that state elections are fought with local leaders focussing on local issues.

I refuse to believe that the fake intolerance movement (Lawlessness and intolerance are different things) has had any major impact on the results. Media generated controversies like this and beef ban also have little to do with the results. BJP just lost out to sons of soil Lalu+Nitish combine.

A credible opposition is always a good thing in Democratic setup. That will keep the Government of the day on its toes and ensures there is a healthy debate and scrutiny of policy decisions.

Backward step 1 – punishing the innocent or electing the corrupt? 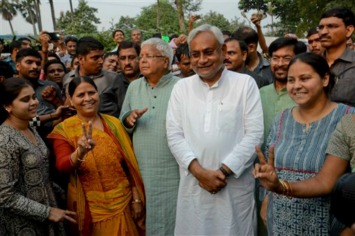 These election results also present some grim outlook for our Democracy. First is the story of RJD party chief Lalu Prasad Yadav. For details of the corruption charges and court order, you can refer to Fodder scam. Lets look into both sides of the story – he is innocent and he is not.

First possibility – people of Bihar chose to vote for RJD because they firmly believed its supremo was innocent and wrongly punished. Assuming Lalu Prasad Yadav is innocent means that the premier investigating agency in our country, CBI, and our Judiciary have done grave injustice to this innocent man.

Lalu Prasad Yadav – Messiah of the poor, backward and voiceless people of Bihar, a former Chief minister, a revolutionary – had been falsely implicated and sentenced to 5 years in jail by 2 of the most important pillars of our Democracy. This indeed is a great cause of concern.

The other possibility is people of Bihar do not care if the party they voted to power is lead by a man whose corruption is proven in a court of law and he is even sentenced to sit in a prison for 5 years. This is an even more dangerous prospect for our democracy since people not concerned about criminal antecedents of representatives they are electing. Imagine what kind of anti-corruption steps can a Government take that has its lifeline supported by a man convicted on corruption charges?

Backward step 2 – rise of the underperformers 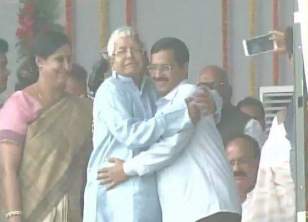 The unholy alliance between RJD, JDU and Congress Party has the danger of turning out to be a winning formula in other States as well.

Nitish Kumar had so little faith in his own 15 year rule that he joined hands with his arch rival. Now, even with less than 17% vote share, he still manages to cling on to the CM chair. Imagine SP joins BSP & AAP when UP goes for polls. Or TMC warms up to BJP in West Bengal. Or Congress takes JD(S) help in Karnataka. The loser in this game is our Democracy.

Political parties will now not fear under performance. They know how to share power and continue to celebrate incompetence.